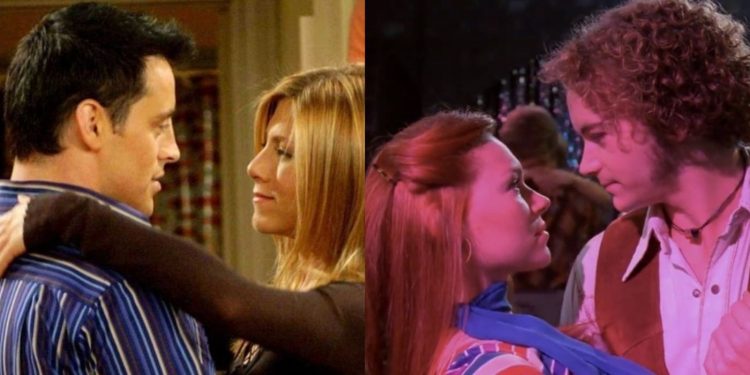 Mila Kunis recently revealed in an interview with Access Hollywood that the upcoming That ’90s Show series will see Jackie (Kunis) and Kelso (Ashton Kutcher) return to Point Place as a couple. While this may be a nod to their real-life relationship, it has led to discussions of how this controversial choice has changed the overall story.

Many sitcom power couples have stood the test of time and remained relevant to modern audiences, but the most heated discussions involve some of the show’s most controversial ships. That being said, who are some of the most underappreciated couples that deserved a second chance in sitcom history?

Since its 1994 debut, Friends has remained one of the most well-known and discussed sitcoms. Any viewer of the first episode can gather that Ross and Rachel were the true endgame, so why did the writers decide to pair Joey and Rachel up in the show’s ninth season?

Fans recall this storyline as one of the worst in the show’s 10-season run. When Rachel announced her pregnancy after Monica and Chandler’s wedding, Joey was there to help Rachel through it. He even asked Rachel to move in with Ross because Joey felt guilty about him missing the pivotal moments of Rachel’s pregnancy. It may not have been endgame, but the two still proved to be a great team that had far too much-undeserved hate from the fans.

Before Monica and Chandler were even a thought in any viewer’s (or writer’s) mind, Tom Selleck portrayed Richard, Monica’s first true love. Family optometrist and best friend to Monica’s father, their relationship was frowned upon by her family, but certainly not by every viewer at the time.

RELATED: 10 Friends Memes That Sum Up Monica As A Character

Once the two reconnected at an event Monica was catering at, there was an unmistakable connection between them. Their relationship only lasted one season, but their feelings for one another would spell trouble for both of their subsequent relationships. In the end, their age difference paired with their clash of goals would lead to their inevitable downfall.

By Friends’ ninth season, Monica and Chandler were married, Ross and Rachel were making amends, and it seemed as if Phoebe and Joey’s potential future was being hinted at (as well as Phoebe and David’s). However, fans were caught off guard when Paul Rudd’s Mike Hannigan came into the picture and showcased one of Friends’ most successful relationships.

When Joey promises Phoebe a date with his friend Mike and forgets all about it, he is scrambling for time and simply resorts to yelling “Mike” in Central Perk. Luckily, Mike responded. He was one of the first men to truly appreciate Phoebe for who she was, despite her quirks.

One of the most classic will-they-won’t-they” scenarios in sitcom history, Seinfeld writers completely defied what was expected of Jerry and Elaine’s relationship (and it was for the best). Right off the bat, the two discuss, in Elaine’s first onscreen appearance, that they are better off as friends (despite dating previously) and continue with their dating lives.

RELATED: 10 Seinfeld Characters Who Never Got Their Chance To Shine

Jerry and Elaine are one of the few sitcom couples that didn’t end the show by getting together officially. The two had multiple “friends with benefits” type situations and even had a child together in Curb Your Enthusiasm’s Seinfeld reunion, but remained adamant that they would not interfere with the friendship, despite their obvious connection.

Since season 4, it was clear that How I Met Your Mother writers were planning on making Robin end up with Barney, though there were a few hurdles along the way. One of the most notable hurdles (and, arguably, Barney’s best relationship) was Quinn.

The two officially met on a double date, though he had seen her numerous times previously, as Barney was a regular at the strip club where Quinn worked. The two had a great connection and Barney would eventually propose, only to realize the two didn’t trust one another. If they were able to work out their issues, these two could’ve made the long haul.

It was revealed in the first episode of How I Met Your Mother that Robin is not the mother of Ted’s children, no matter how much viewers wanted to believe she was. Robin did not believe the two starting a relationship was a good idea, which is why the introduction of Victoria made fans believe the mother’s identity had officially been revealed.

RELATED: 10 How I Met Your Mother Memes That Perfectly Sum Up The Show

On the surface, it seemed Ted and Victoria had a relationship comparable to a fairy tale, but her commitment to her work would prove to be their biggest obstacle. Long distance would lead to their inevitable breakup until they found each other once again in season 7. Unfortunately, in both cases, Ted’s feelings for Robin would be their downfall.

There aren’t many sitcoms that make fans root for the homewrecker, but that’s the case viewers of The Office found themselves in. Jim and Pam were the series’ endgame, but when a new job opportunity arose for Jim, he met Karen.

Many fans of The Office threw undeserved hate at Karen simply because she wasn’t Pam, but, in reality, these two were one of the better ships on The Office. However, with Pam ending her engagement with Roy, it was clear the two were going to pair off eventually. That being said, it would be interesting to know what could have been between Jim and Karen without outside interference.

Since Andy and Erin met, it seemed clear that they were going to make it to the end along with Jim and Pam. Unfortunately, an obstacle arose when Pete and Clark joined the show in the final season.

With Andy and Erin’s relationship in turmoil, Pete would become a friend and a confidant to Erin until they slowly developed a relationship comparable to Jim and Pam’s. It may have been a complete curveball, but Erin and Pete proved to be one of the show’s best couples.

In one of the more unlikely pairings in sitcom history, Jackie and Hyde are arguably the best couple in That ’70s Show. They changed each other for the better, and it seemed as if the two were going to remain together in the show’s final season.

Season 8 of That ’70s Show is notorious for having the most unnecessary couples, but the one that fans truly could not understand was that of Jackie and Fez. It was teased at the beginning of the season that Jackie and Kelso would reunite, but Ashton Kutcher’s departure mid-season would make that unlikely. While her pairing with Fez did prove that Hyde changed Jackie’s superficial views on who she looks for in a partner, fans still hold on to hope that this storyline can be improved on That ’90s Show.

In another strange choice from the That ’70s Show writer’s room, the show’s first season had a strange love triangle between Eric, Donna, and Hyde. Fans of the show choose to ignore this fact as from season 2 onward, it is rarely referenced again and is seemingly brushed under the rug. That being said, the pairing actually could have worked if explored further.

The first season of That ’70s Show did differ from subsequent seasons in terms of quality and character traits. The two getting together would make sense, as they went to each other for advice on their similar parental issues. The season 4 premiere showed a bit of what could have been if Hyde and Donna did end up together, but it would have been interesting to see their relationship develop.

NEXT: The 30 Best Sitcoms Of All Time (According To IMDb)